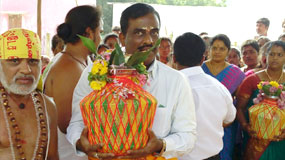 The power of Shiridi Sai Baba is known to all His devotees. If you faithfully worship Him, peace and happiness will have a permanent place in your life. This is the experience of almost all his devotees.

Spreading the message about Shiridi Saibaba itself is a great service to the humanity. There is no greater satisfaction than enabling more people to become His devotees.

An holy organization by name Shree Shiridi Anandha Sai Baba Trust has been started to spread many spiritual messages of Baba and the miracles performed by Him.

Baba says “ If you visit my abode once, I will come and stay with you permanently.”

R. Mainavathi Ramesh is the founder of Shree Shiridi Anandha Sai Baba Trust. An ardent devotee of Saibaba, Mainavathi has experienced many a miracle performed by Baba and till today she is a great beneficiary of Baba’s merciful love.

The foundation stone for Shree Shiridi Anandha Sai Baba Trust was laid on 22-02-2013.The holy Kumbabishekam was done on 13-2-2014. People regularly visit the temple and reap the benefits according to the intensity of our faith.